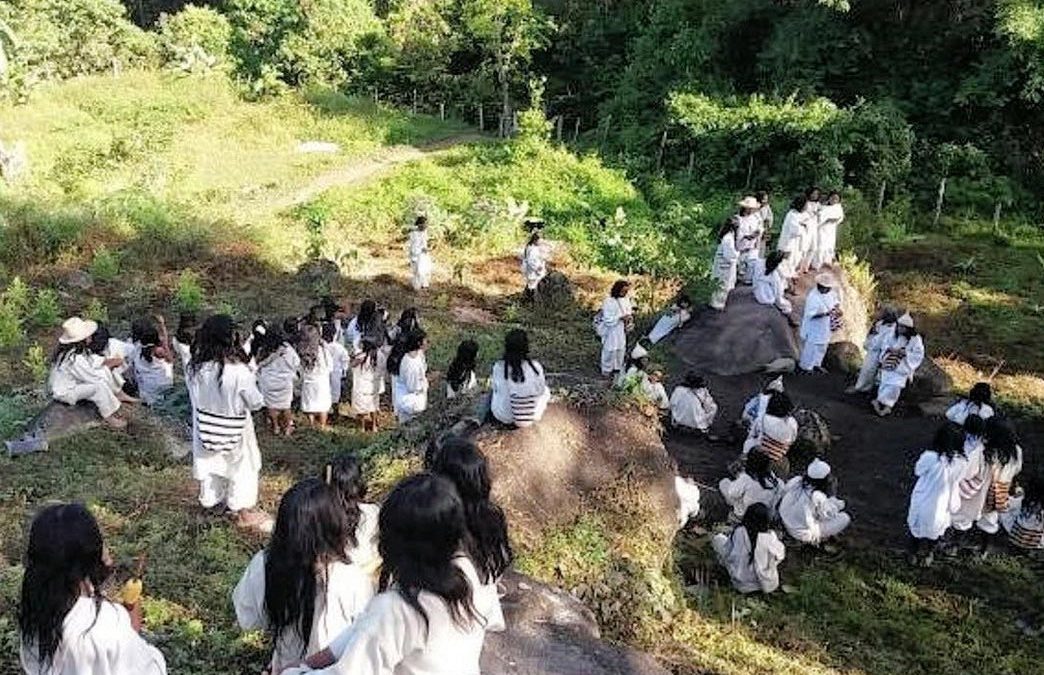 We are sorry for the long delay in letting you know how the donations you made last year have been spent but it has taken a long while to get a full report back from OGT due to a reorganisation following the death of Santos Sauna and the election of their new Cabildo Arregoces Conchacala.

The response to this campaign was wonderful and the Kogi send their grateful thanks. In the event national and international pressure ensured that the Colombian government responded by deploying the military to deliver emergency supplies to accessible Kogi villages. At the same time NGO’s on the ground were able to respond with humanitarian aid and this meant that the immediate crisis was averted.

However the OGT quickly alerted THT to longer tem problems that had been highlighted by the emergency; the four indigenous peoples of the Sierra had drifted apart in the pandemic isolation, there were even rifts between Kogi communities and decisions about the care of sacred sites needed to be addressed. It was clear that there was a significant need for a series of pressing debates. Meetings on a large scale cost in local transport, food and gifts to Mamas who may have had to leave their communities for days to reach the venue. Our donations were released in Colombia to the OGT later than planned but proved essential in financing a number of important meetings designed to strengthen Kogi self-government and the preservation of peaceful relationships between the indigenous groups living in the Sierra.

A series of meetings was proposed across Kogi communities. These required the attendance of Kogi Mamas from the four main ezuamas – Guamaka, Makutama, Suribaka and Noabaka. They were scheduled to take place at specific times in accordance with the Kogi cultural calendar and the cycle of traditional consultations with the Mother.

OGT asked THT to finance these meetings under the umbrella of spreading the Kogi message and the Trust initially sent $6000 to set the ball rolling for meetings in March 2021 in Mamalua in Dumingueka and Kalabangaka in the Sewiaka community. More meetings were scheduled in May in Gonawimake on the Jerez River, and in June at Mankuaka on the Tucurinca River in Cienaga and within the community of Bunkuanguega in the basin of the Canas River in Dibulla. Finally there was a meeting in Teku Bunkuanezhaka in Santa Marta on 7 and 8 July.

This was attended by Arregoces Conchacala himself – the intention was to raise the profile of OGT within the Kogi communities on the Jerez river basin and review land ownership disputes with the Wiwa and peasant settlers. This resulted in a request for OGT to manage land purchase in these communities. An agreement was also reached to establish a dialogue between the Wiwa and Kogi peoples not just in respect of land ownership but also to discuss health and education in the area.

For this meeting Mamas and the leaders of 6 Kogi communities, the Cabildo and executive members of OGT assembled – about 200 people in all – with the aim of revising the current structure for local government. This had to be agreed in line with the Kogi framework for the Law of Origin and in accordance with their responsibilities for caring for an ezuama in the face of local conflict. Arising out of this was a commitment to strengthen and comply with the law of ‘Se’ through socialisation and training in the care of ancestral territory. Also it was agreed to continue forging links to institutions to progress the right of the Kogis to education. Another point of interest was to support the Kogi community with the construction a traditional house for the Mama (Nuhue) and agreement to participate in the meeting in Bunkuangueka in order to ratify the Territorial Council of the Sierra Nevada as a public institution for the indigenous people of the area.

This is the place where the Territorial Council of Cabildos was born. This was aimed at reviving the spiritual, cultural and political unity of the four peoples in the Sierra. It was agreed to work on an agenda and identify what should be done and how to take things forward. The overall aim is to bring the four peoples of the Sierra closer together. A document was prepared to develop a structure for self-government and appoint an official secretary in each town to ensure traditional work is carried out as defined by the Mamas. This includes the spiritual cleansing resulting from internal conflict. It was also agreed to monitor the Black Line as decreed in 2018 at the exit to the sea through the construction of a Nuhue in the sacred space of Mitansama. This will assist in monitoring the management and care of sacred sites along the Black line.

This was held on 7 and 8 July in response to queries from Mamas at previous meetings. It was held at the place where the Father and Mother are and where the Mamas can have a dialogue with the ancestors and do their spiritual work in order to fulfill the instructions of the Mother. It is necessary to ask forgiveness of the Mother for the breaches made in the order of nature and to correct the imbalances which are being yaused so it is a space where you can receive advice on everything that exists in nature and is where Gonawindua was created.

The Mamas were able to analise the progress this recovery is making. Important agreements have been reached in the Tayrona Park, and work is being done in association with an ancestral organisation similar to the regeneration work under consideration with THT. It is called Munekan Masha and is intended to recover the sacred sites. It was agreed that Mamas and leaders of OGT should do some traditional work along the mouth of the Madgalena River. It was agreed to appoint a traditional Kogi authority to exercise environmental control and improve relations between indigenous and non-indigenous people. A work agenda was agreed. There was a follow up meeting and both meetings involved the participation of 40 people who were supported with food contributed to OGT by THT.

The acquisition of Computers & Installation of internet

Help for funding this was requested in October 2020, it was linked to the need to connect two primary health care centres for emergencies. It was agreed that THT would pay for the installation of internet, the purchase of a laptop computer and scanner for use by two indigenous health co-ordinators at health posts in Dumingueka and Bunkuanezhaka. This has greatly assisted in helping to maintain contacts for advice on the health of the Kogi people in these and adjacent communities. The service has proved particularly valuable throughout the course the pandemic. With the grant received from THT six laptops, three printers and accessories were supplied and a satellite internet subscription for a year was paid for in the two areas through the company Hughesnet.

THT also provided financial support for the purchase of agricultural tools, threads and cotton fabrics, kitchen utensils etc to repair the damage caused by fire to the houses and crops of 20 Kogi families in Maldaka. Food (dried fish) was also purchased to support the community whilst rebuilding the Nujue ceremonial house.

As you can see your donations have been put to very good use and OGT has asked us to pass on their very grateful thanks for making their meetings possible, for enabling the purchase of vital equipment to support the Health co-ordinators and the emergency support required for families affected by fire.

The Trustees of the Tairona Heritage Trust