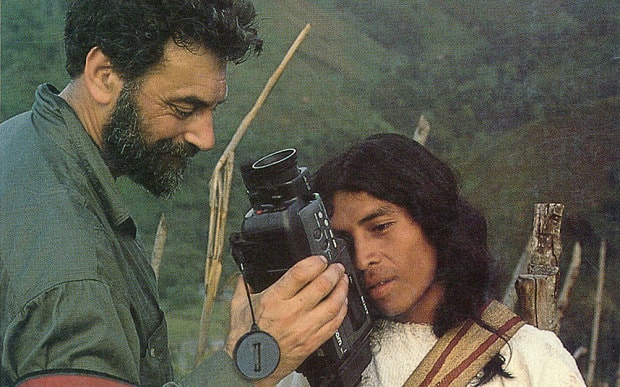 We would like to offer you the latest news from Colombia and the work of the Trust over the last few months. To say the least, it has been a rather tumultuous time.

Following the death of Santos Sauna, the Cabildo (Governor) of Gonawinduúa Tayrona, from Covid-19  in August, the Mamas have selected a new Cabildo, Arregoces Conchacala.  Arregoces has been known to the Trust since 1989 when Alan Ereira and Felicity Nock first visited the Sierra to make ‘From the Heart of the World’ for the BBC.  Here he is pictured with Alan who is showing him a handicam and explaining the filming process.

At that time he was a rather rebellious young man who had been instructed by the Mamas to take care of the BBC visitors. He wore a watch to symbolise his interest in connecting with Younger Brother and he spoke some Spanish. Subsequently Arregoces became a political leader engaged with all the people of the Sierra. The modern picture below shows him last year at an important meeting.

Another young man in 1989 who helped with translations of the film was Juan Mamacatan (Juancho) whose father was Mama Bernardo.  His father had not enjoyed being trained as a Mama and so he took the difficult decision to hand his young son over to missionaries for education. But later Juancho became the Cabildo of OGT for a while and then trained as a Mama. He is now Arregoces’s counsellor.  We are all looking forward to working together for the Sierra and the world

Fortunately the Kogi who were isolating in the Sierra due to the Covid-19 pandemic received sufficient food, medicines and protective equipment from various NGOs and the government to keep them well supplied so we have been exploring other ways of utilising funds we raised for them. We have been in discussion with OGT about supplying satellite and internet equipment for use by the Health Co-ordinator for the Kogi community, and will update you on our progress in this regard once a decision has been made in line with what the Kogi decided would be most useful for them.

This was on hold while various participants involved with the Bridges/Unesco organisations were locked down in their various countries but things got under way again in August. A revised document which fleshes out the project in a little more detail with specific targets and more robust scientific measures is now under consideration.  Fingers crossed we will see more tangible progress in the upcoming months, while we are planning the new management structure of the project within the Trust

Alan Ereira has written The Black Line of the Sierra Nevada de Santa Marta: a Red Line for a Mountain, published in October as the final chapter in Space ,Place and Religious Landscapes: Living Mountain, edited by D. Gunzberg and B. Brady (Bloomsbury Academic).

If you would like to hear a 6 minute presentation on the chapter here.

Unfortunately the discounted price is £59.50 hardback, £45.90 for a download.  We are not allowed to make the chapter available online, and with libraries locked down this seems a problem.  It makes this newsletter seem fabulous value!

At the same time Alan has published a chapter titled Finding Sea Level: The Concept of Harmony in the Culture of the Kaggaba (Kogi) People of Colombia, in ‘The Harmony Debates: Exploring a Practical Philosophy for a Sustainable Future”, ed. N. Campion (Sophia Centre Press), with a foreword by HRH The Prince of Wales.   Water is our theme now, and another Trustee, Luci Attala, has written Mind the Gap!  Exploring the Gap Between Harmony and the Watery Materiality of Climate Change(s) in Rural Kenya in the same volume.  The 600 pages also include contributions from such well-known names as Rupert Sheldrake and Dame Ellen MacArthur, and this one costs just £25 from Amazon

Christmas is going to be difficult for many of us this year being separated from our loved ones and facing further restrictions on travel, movement and socializing. We are hopeful however that through the new scientific solutions and breakthroughs we will soon again be able to meet in person and share the wonderful moments that make life’s memories. Despite it being a very different celebration this year we wish you all a cheery time with a brighter and happier new year to look forward to.

From the Trustees of the Tairona Heritage Trust