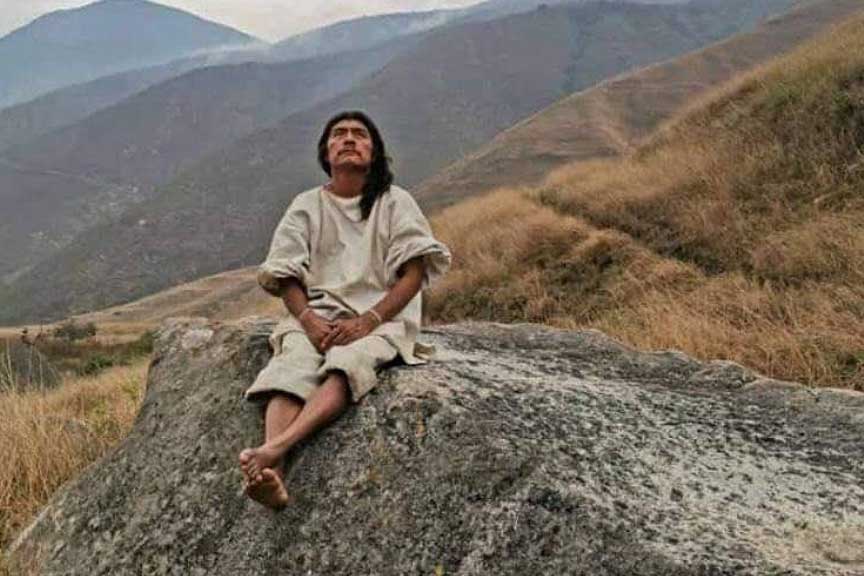 It is with deep sadness that we announce the death of José de los Santos Sauna Limaco, fourth Cabildo of the Organización Gondawindúa Tayrona, which acts for indigenous rights in the Sierra Nevada de Santa Marta and represents Kogi interests in particular before the Colombian state.

Santos Sauna contracted COVID 19 in August and died within a few days of being admitted to hospital in Santa Marta on 6th August 2020. He was only 44. Following detailed consultation with his wife, extended family and officials at the highest level of administration in Magdalena, transport was granted for the protected body to be flown back to the Sierra so that the Kogi can observe traditional funeral rites in the place of his birth.

Santos Sauna worked within the OGT for many years in offices of Healthcare and Education however it was in 2009 that he asked our chairman, Alan Ereira to fly to Colombia to accompany him on the first section of his long journey of inauguration by the Mamas and the high “sacred sites” as Cabildo Gobernador. This followed on the death of Mama Valencia and the acceptance of his successor, Mama Pedro Juan, Alan recounts that Mama Pedro Juan presented him to Santos as an ‘inheritance’ and from this time the two were bound together in the struggle to protect the Sierra and amplify the Kogi voice to be heard beyond it. On this visit Alan was asked by the Mamas to make a second film with them and so ‘Aluna’ (2012) was born. Alan remembers that Santos lent his own mule to carry him up the mountain but that the mule collapsed en route under his weight causing much amusement among the Kogi.

In September 2018 following discussions with the French NGO’s founder Eric Julien, Santos involved the Kogi Mamas with Tchendukua’s ‘Cross-diagnosis’ in the Drome in France. The outreach to Europe was visionary, extending Kogi influence into new territories in a new way. Alan and our Trustees were invited to support, participate and witness the Kogi’s analysis of the Drôme landscape. Indirectly, this event led to the Trust’s involvement with the Bridges/Unicef project ‘Reviving Water’.

Santos often seemed to be the political glue that held everything together in the Sierra. He was a powerful defender of indigenous rights for the four peoples of the Sierra, and he worked tirelessly with his team on a project to record the sacred sites that delineated the boundaries of the Sierra. In the company of Mama Shibulata, Santos presented the associated cartography to an international audience at a Google outreach seminar.

In August 2018 the line of sacred sites achieved formal recognition in Colombia as the ‘Black Line’ defining rightful indigenous territory in Decreto 1500. This was among the last acts Juan Manuel Santos Calderón signed as he stepped down from Presidential office. The President counted Santos Sauna as a ‘dear friend’ who he met at the beginning and end of his term in office. The Cabildo Gobernador was well known by all the major stakeholders in this campaign and played a significant part in getting the agreement signed.

Recently he became involved in the high-profile campaign #1500 Latidos (Heartbeats) defending the Black Line against threat from interests seeking to dismiss the Decree and pursue industrial expansion along the line of sacred sites.

Think of him as a man with two mobile phones, one for each ear, both urgent calls – held up for each expected meeting yet when present generous with his time and passionate to talk about the Kogi and their deep cultural history. A man astride two cultures, a difficult place to be.

Everyone in the Trust who met him counted him as a friend. The Kogi will mourn him and the Sierra will count his loss at this difficult time. We pay tribute to the man and his many achievements and look forward to supporting his successor.